Need a perfect dish that would work as a brunch item, or dinner?  Well, I’ve got one for you!  I know recently I’ve done some tarts and frittatas (such as: gluten-free tomato tart, tomato leek & brie tart, squash blossom & bacon frittata), but they are so easy in the summer!

And now that it’s (slowly) cooling off, don’t spend too much time in the kitchen and enjoy the last of the summer vegetables.  Make this tart!  If you’re not a fan of squash or zucchini, feel free to swap for anything else that’s colorful!

Add the flour, salt, and baking powder into a food processor.  Pulse about 2 times to mix the ingredients.  In a small glass mix together the olive oil and water, then slowly pour it into the flour mixture with the food processor on.  Process until the dough is crumble.  Take it out, and knead it for about 1 minute on a floured surface.  Then shape it into a disk and wrap it up with parchment paper.  Chill in the fridge for at least 30 minutes.

In a large bowl combine the yellow squash and zucchini with olive oil, garlic, salt and pepper.

Preheat the oven to 400ºF.  After the dough is chilled, unwrap it and press it into a 9 inch tart pan.  Spread the ricotta mixture over the dough.  Then arrange the zucchini and squash slices over the tart (there will be a couple of layers).  Bake in the oven for 40 minutes, or until the edges are golden brown.

Allow to cool, then sprinkle with Parmesan cheese and basil.  Cut into wedges and serve.

This week I went to visit my parents in Chicago, and while I was there I got to enjoy a wonderful thunderstorm.  While growing up in the Midwest, I definitely took thunderstorms for granted.  I don’t feel like the East Coast storms are as grand.  It was nice to watch the lightning and listen to the thunder as your falling asleep.

The gloomy weather has spilled into DC this Saturday.  Today has been dreary and surprisingly cool (for mid-July).  To not just waste a cool day sitting on the couch, I signed up for a composting workshop at Common Good City Farm.  The organization grows food, educates and assists low-income DC residents in meeting their food needs.  They have a lot of workshops, hours open for volunteering- you should all check it out!

Do any readers compost?  If so, I’d love to hear about your experiences and what has worked (or not worked).  What kind of composting system do you use?

But for a gloomy, cool day like today veggie pancakes are perfect.  These are not breakfast morning pancakes, rather they are full of vegetables!  Perfect for lunch, dinner or snack.  Once you make them, they can be eaten warm or cold- and they last a couple of days in the fridge.

These are full of flavor, but they went perfectly with the Spicy Mayo Sauce we used previously on fish tacos.

In a large kitchen towel (or paper towel), mix together the potatoes, carrots, zucchini, onion, and garlic.  Squeeze access liquid out of the vegetables.  Add the veggies into a large bowl, then add: flour, garlic, eggs, salt, pepper and red pepper flakes.  With about 1/4 cup of the vegetable mixture, shape the vegetables into patties and lay them out on a flat surface.

In a skillet, heat up the olive oil.  Once it’s hot, place the vegetable patties 2 or 3 at a time on the skillet.  Cook for about 3-4 minutes, or until it is lightly brown and crispy.  Then flip it over and cook it for another 3 minutes.

Serve with Sam’s Special Sauce (mayo & chipotle’s), which can be found here.

My weeks either feel slow as a turtle, where I can feel every minute and second on the clock.  It’s terrible!  When Friday rolls around, you breathe a sign of relief!

Other weeks fly by and I don’t feel like I’ve had time to catch my breath.  The time goes by and I don’t know where it went or what I spent doing it.  I often think my coworker feels like this- she has an adorable little boy, a full time job, she commutes and still goes to school.  How does she do it all?

This is one of those recipes which is perfect for her, or for anyone with an upcoming hectic week.  It can be made over the weekend, and then baked right before a Tuesday night dinner.  Or just bake it on Sunday night and enjoy it for lunch throughout the week.

There are only so many tacos or enchiladas we can eat, so I like to mix it up a bit with various dishes.  I liked the idea of a baked dish with layers of Mexican flavors.  And don’t worry, it can be adapted to your favorite veggies. 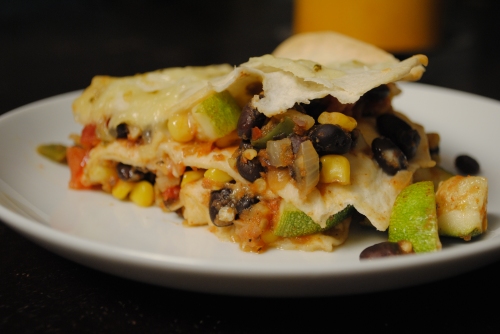 Preheat the oven to 350ºF.  Place tortillas on a cookie sheet, and bake them for about 3 minutes on each side, or until they are lightly brown.  I ended up using 2 cookie sheets, or you can do them in batches.

Heat olive oil in a pan over medium heat.  Add the onion and sauté for about 5 minutes, or until the onion is translucent.  Then add the garlic and jalapeños.  Cook for another 2 minutes.  Stir in the chili powder and cumin, cook the ingredients for another minute.  Then add the tomatoes, zucchini, corn and black beans.  Cook for about 5 minutes, when the zucchini becomes tender.  Finally, sprinkle in salt and pepper while mixing before turning off the heat.

Bake the Mexican Tortilla Lasagna for about 30-45 minutes, the cheese should be bubbly on top.  Let it stand about 10 minutes before cutting and serving.

As I mentioned yesterday, today marks the first day of The Food Matters Project.

Here are some of the changes we made from Mark Bittman’s original recipe:
* we weren’t in the mood for winter squash (might be due to the warm weather), and decided to use zucchinis and yellow squash.
* we didn’t use skewers to roast the squash
* rather than doing a glaze, we chose a to make it a dipping sauce

Preheat the oven to 400ºF.  Spray a cookie sheet with cooking spray.

Crack an egg into one bowl, mixing the yolk and whites together.  In the other bowl, pour in the Panko crumbs.  Dip each squash piece into the egg mixture, and then dip it into the Panko crumbs.  Continue to do this with the rest of the zucchini and squash pieces and arrange all of the vegetables on a cookie sheet.  Bake in the oven for 20 minutes.

In a food processor add: chipotle chiles, olive oil, honey, garlic and salt.  Processes the mixture until the sauce is well blended.

Enjoy each squash or zucchini with some of the chipotle sauce.

I apologize for the lack of posts this weekend.  Sam and I went to Virginia Beach for a short weekend getaway.  Both of us needed a break from the city, and a little beach time!  I used to live in VA Beach, so it also gave us an opportunity to hang out with my friend P* (and her fiancé- J*, and her sister- S*).  We had a fantastic time hanging out with them at a fun new place I  never knew about.

Pacifica is not a big tourist destination, since it’s a little north of the majority of the hotels.  We had a great time, and I’ll keep this tapas restaurant in mind when we go back.  Mainly, what we did over our weekend is lay on the beach.  Both of our bodies needed some sun, and our minds needed some good reading on the beach.  To top off the weekend, traffic between DC and VA Beach wasn’t bad at all- so life is good!

But it’s back to the grind today.  Lucky for us, Independence Day weekend is right around the corner, so I’m sure this week will fly by.  We’re looking forward to trying a new place for dinner this weekend.  It’s been around for way over a year, the Logan Circle place of Birch & Barley, but we haven’t tried  it yet.  And of course, I’m looking forward to some 4th of July fireworks!

I’m not going to lie, we haven’t been doing much cooking lately.  Or rather, the stuff that we have made hasn’t necessarily been looking stellar enough for the blog, or it just didn’t have a taste that we’d want to someone else to replicate.  But we’ll get back into the groove once again, so hopefully I’ll have more frequent posts.

I am leaving you with this great burrito recipe I got from the June issue of Vegetarian Times.  The recipe recommended chayotes, but the grocery store didn’t have any, so a zucchini was the substitution.  In addition, I added a little * next to cilantro.  Please add that to the burritos, they’ll taste significantly better.

Why did I not add cilantro to ours?  Well, apparently someone from Peapod mixed up the cilantro with a parsley variety.  So we got two different kinds of parsley in the last grocery delivery, and I didn’t realize it until I was ready to chop up my “cilantro” to add to the burritos.  Ooops!  I ended up using very little parsley, but it didn’t have the same great taste that the cilantro would have given it. 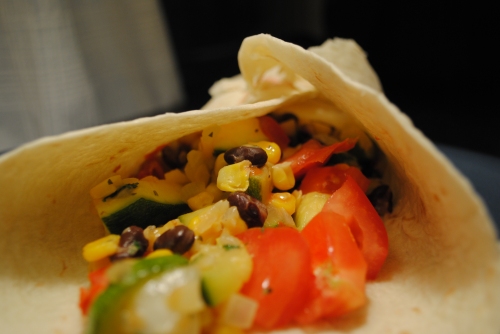 Heat olive oil in a large skillet over medium heat.  Then add the onion, zucchini, jalapeños and garlic; cook them until the onion begins to brown.  Then stir in the corn, black beans and red pepper, cook for another 5 minutes.  Finally, stir in 1/3 of the Mexican cheese, salt and pepper.  Lastly, add the lime juice to the mixture.

Divide the vegetable mixture between the 3-4 tortillas.  Sprinkle the remaining cheese on top of the mixture, before rolling the tortilla.

* Cilantro can (should be) sprinkled onto the top of this mixture to bring out the excellent flavors.