Gazpacho is a cold, tomato-based soup which originated in Spain.  I spent the summer of 2004 studying abroad in Spain, while living with a Spanish family.  For my first meal with the family, my señora made gazpacho.  Having only had warm tomato soup growing up, I did not like it.  The idea of a cold soup just wasn’t appealing to me.  But she kept making it throughout the summer, and I kept on eating it a little at a time.  After the summer of falling in love with Sevilla, when I arrived back in the US, I realized I began craving gazpacho.

It’s a great summer staple for me: fast, easy, simple.  You can make it ahead and the flavors blend nicely.  It’s perfect when tomatoes are in season, full of flavors.

So when I was flipping through the April’s Cooking Light and saw a cucumber gazpacho, I was excited to try a new version of the cold soup.  The original recipe had shrimp, which is also a great addition, so keep that in mind. 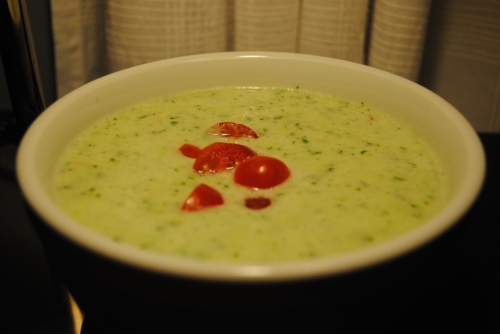 Add all of the ingredients, except the cherry tomatoes, into a blender or food processor.  Process until smooth.  Ladle into bowls, and use cherry tomatoes as a garnish.