And we’re back with the monthly reviews on Fifth Floor Kitchen!  What photos did I capture on my iPhone this past month?

Interested in past months?  Check them out: May June July August

This was taken on our last day of our honeymoon in Phuket, Thailand.  Check out our posts about it here. 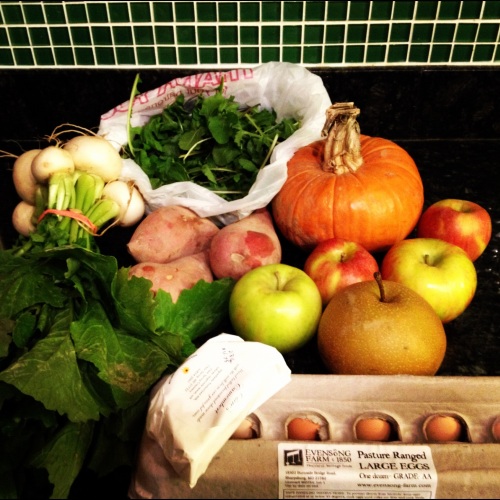 First week back from our honeymoon and we were excited for food from the farmer’s market!  We got: arugula, turnips, a pie pumpkin, apples, pears, sweet potatoes, cheese & eggs from the Penn Quarter Farmer’s Market.

Don’t know what to eat for breakfast?  Check out this post on making Fall Granola– perfect to mix with yogurt or milk!

Sam and I visited our friend Beth in Baltimore.  We loved this place: Abbey Burger Bistro, make your own burger (and it’s got some good beers as well).

While in Baltimore we stopped by the Baltimore Farmer’s Market & Bazaar (check out the post about it here).  Sam pickled the cucumbers, and we enjoyed the spicy cheese & duck eggs.  But the honey butter is the best- have you had honey butter?  If not, you’re missing out!

My friend Alix and I got a chance to see Deb Perelman from Smitten Kitchen!  There were so many people at Politics & Prose to see her!  Checkout her cookbook and blog for some great recipes! 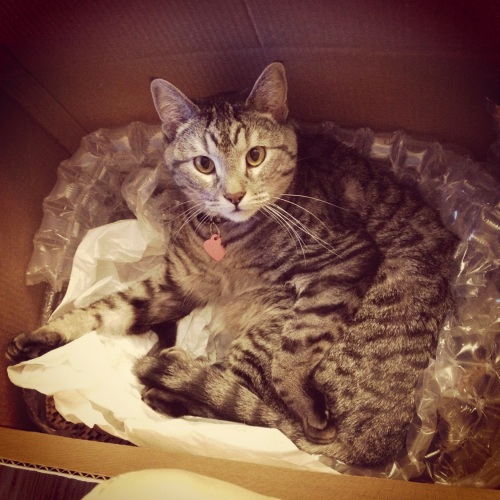 We have 2 cats who have really enjoyed getting wedding gifts.  Well, mostly the boxes that the gifts come in- Van Gogh loves to relax among the bubble wrap and paper!  One of the many gifts was a cookbook- and we tried this Shepherd’s Pie recipe!

Last May, when I attended Eat, Write, Retreat (check out my post about it) I met a lot of wonderful bloggers.  One of them was Olga (blog: Mango & Tomato; Twitter: @MangoTomato), we tried out the new DGS Delicatessen in Dupont Circle for lunch, and I had a delicious Salmon Pastrami Sandwich on a bagel. 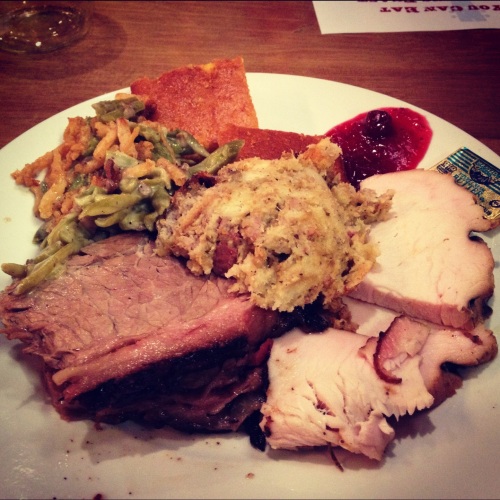 As I mentioned, we had a low-key Thanksgiving.  After running the So Others Might Eat Turkey Trot 5K– Sam, myself and his brother went to Hill Country Barbecue for an all-you-can-eat dinner.  As always, Hill Country did not disappoint!  Although my favorite was the green bean casserole- it’s been so long since I’ve had it!

Yesterday (January 23rd) many celebrated the first day of the lunar year.  For the next 15 days the Chinese New Year festivities will continue, ending on the day of the full moon.

When I had some friends over for our monthly dinner, I decided to go with the theme of Chinese food.  I had made egg rolls, lettuce wraps, rice noodles with vegetables and some sesame spinach.  In true foodie fashion, I think I need to work all of those a bit more before they are presented on the blog.

But I think the dessert turned out well, I even had some last night.  This was the first time I’ve ever made a sorbet.  Although it’s not the perfect January dessert, it was very light and refreshing (definitely would be a great summer dish).  The pear sorbet included a Sesame Wonton Crisp, which was extremely easy to make.  It’s a great little “extra” on an ice cream or sorbet!

Want to try another chilled dessert?  How about Rum Raisin Ice Cream or Kumquat & Orange Sorbet.  Let us know which is your favorite!

Remember to store your ice cream maker in the freezer at least 6 hours before this (this note is from personal experience).

Make a simple syrup, heat up the water in a small saucepan until its boiling.  Then add the sugar and keep stirring until it dissolves.  Once it’s dissolved, then turn off the burner and let the syrup sit until it cools off.

Puree the pears in a food processor until the mixture is smooth (really smooth).  Then transfer the mixture to a bowl.  Add the simple syrup, brandy and vanilla extract.

Process in the ice cream maker per the directions.  For example, I did mine for about 30 minutes.  Transfer the sorbet into a container and keep in the freezer so it firms up.  Serve with a wonton crisp!

Preheat the oven to 350 degrees F.  Place parchment paper on top of a cookie sheet.  Arrange the wontons, leaving space in between each of them.

In a small bowl mix together the sugar and ginger.

In another small bowl mix together the egg yolk and heavy cream.  Brush the top of the wontons with the egg wash.  Then sprinkle each with the sugar mixture, and lastly with the sesame seeds.

Bake the wontons until they are crisp and golden, this should be about 8-10 minutes.  Let them cool, and then add them with a sorbet.