As I mentioned in a recent post, Sam and I visited Philadelphia a couple of weeks ago!

The reason behind this trip was run the Rock ‘n Roll Philadelphia Half Marathon.  The run was planned for Sunday, September 16- so with some friends we decided to make a weekend getaway in Philly!  Five of us ran the race (there were 3 first timers that did fabulous) and we had an amazing cheerleader/photographer!

Truth be told, we really didn’t do much research on what to do and where to eat in Philly.  So we walked around, explored different areas, and ate some great food!

Philly is best known for its cheesesteaks, and we definitely wanted to try some.  Now for those that are not familiar with it- it’s a combination of frizzled beef, onions and cheese on a roll.  The cheese used is usually provolone, American, or Cheese Whiz (most popular)- and everyone does have their preferences.

Since we didn’t do much research about this, we asked for some recommendations in a bar and ended up going to: 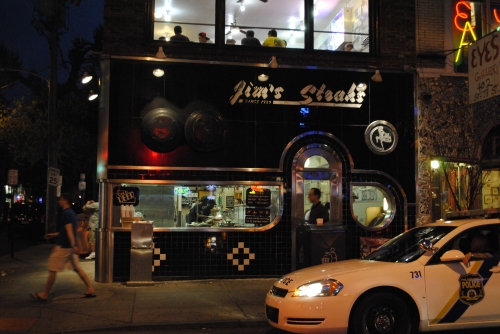 Jim’s Steaks!  The original shop, owned by Jim, opened up in 1939 in West Philadelphia.  The location where we stopped by was on South street- the 2nd location which opened up in 1976.  The four of us chose and shared 2 different cheesesteaks:

This place had an excellent German beer selection.  Sam and I recognized many beers from our trip to Oktoberfest last year.

The next day we stumbled upon the Reading Terminal Market– which we all loved!  If any of you are visiting Philly, definitely stop in here! 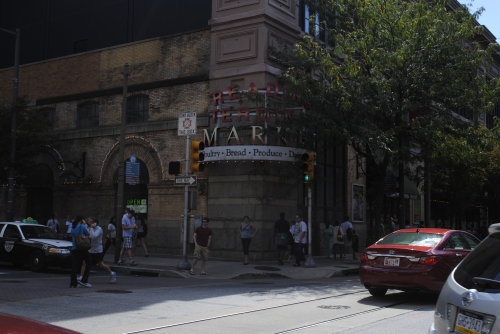 It was established in 1892 at 12th and Arch Streets, and is the nation’s oldest continuously operating farmer’s market.  There is a variety of cuisine available, from soul food and Asian food, to Philly Cheesesteaks and traditional Pennsylvania Dutch fare.

On Saturday morning we enjoyed a perfect breakfast sandwich from one of the Amish merchants: 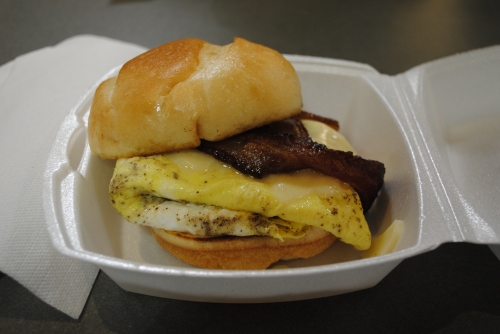 The Amish bring their farm-fresh products (meats, milk, eggs, etc) and distinctive dishes to the market 4 days a week (Wednesday thru Saturday).  Today the market has about 80 different merchants, of which 2 are descendants of the original stand holders from when it originally opened.

The rest of the time we spent enjoying the great sights of Philly and the wonderful weather we had that weekend!

Our last stop on the European adventure was in Munich, Germany (other stops include Poland and Austria).  One of the main reasons for choosing Munich was because of Oktoberfest.  Other than liters of beer, Munich also had to offer plenty of great food.

As many of you probably know, Munich is the third largest city in Germany and the host of the 1978 Summer Olympics.

Fun Fact #3: München (in German) was derived from the Old High German, which  meant “by the monks place”.  The city name comes from the monks of the Benedictine order who founded the city- the foundation date is 1164.  At that time black and gold were the colors of the Holy Roman Empire- they continue to be the city’s colors today.

Of course, the first thing we had to do was drink some German beer!  The liter mugs, also referred Maß, were in all of the restaurants around Munich: 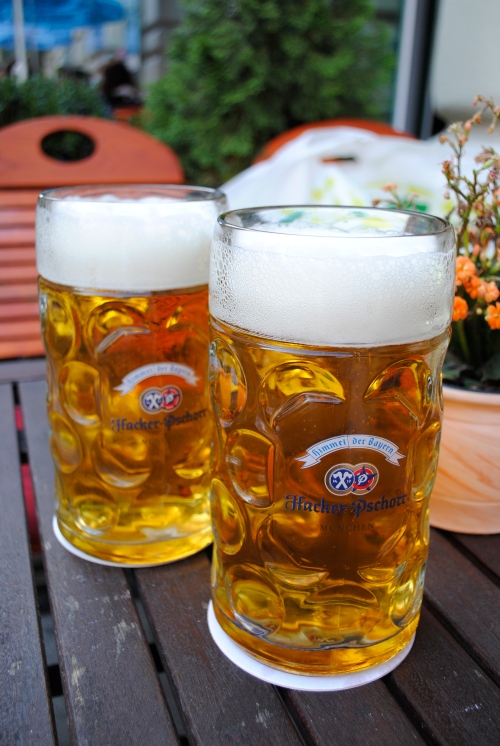 One of our favorite things, not just in Germany but in all of the cities we visited, was the plethora of outdoor seating.  It’s really nice to relax outside- especially with the wonderful weather that we got throughout our trip.

After walking around the center of the city, we stopped at Hackerhouse, just blocks from the Marienplatz. 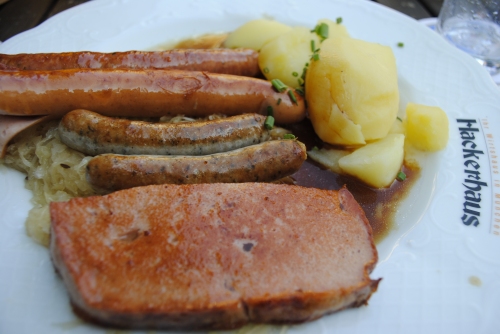 Both of these dishes (above and below) are Oktoberfest specials at the restaurant.  The above meal was a variety of wurst with potatoes.  Sam did say that the sausage link all the way in the back of the photo was one of the best he’s ever tasted in his life.  The dish below was roasted beef with gravy and cold potato salad (with dill and cucumbers).  The salad was definitely a first for me in texture and taste- but I really enjoyed- I wonder if I can replicate it! 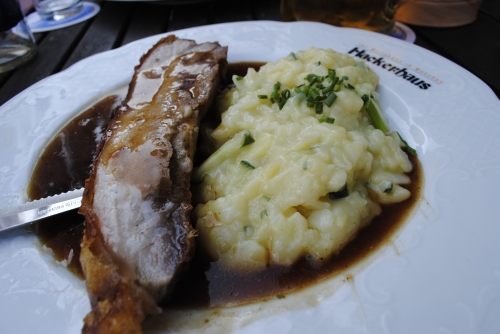 As I mentioned before, when we were in Munich we did stop by Oktoberfest.  Just walking around it feels like a state fair (I’ve only been to the state fairs in the midwest so I’m not sure what others may look like) with rides for kids, vendors with lots of food and many people just walking around.

While walking, everyone will notice that there are massive tents- 14 of them this year.  Each tent is manned by a different brewery.  The capacity of these tents range from 98 to 10,000!  Sam and I visited 2 tents: Armbrustschützen (Bull’s Eye) and Hacker (Bavarian Heaven).

This is the entrance to Oktoberfest, as you can see there are a lot of people going in and out! 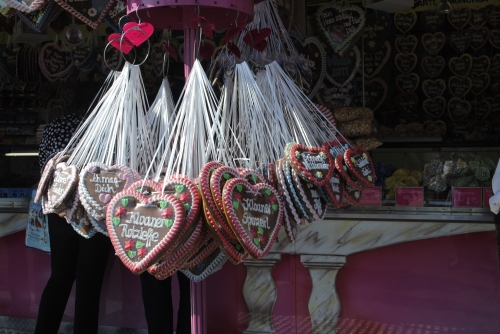 All around the campgrounds there are little kiosks selling Lebkuchenherzen (gingerbread hearts).  They range in size and color as well as a variety of  messages.  For example: Ich liebe Dich (I love you), Du bist mein sußes Herzchen (You’re my sweetheart) or Ich denke nur noch an Dich (I think only of you).

One of my favorite parts of Oktoberfest was brezn (pretzel)!  The pretzels range in 3 different sizes:

And yes, I had 2 of them during our visit.  I don’t think any pretzel from a baseball park will ever compare.  All of these are so fresh and fluffy- I think this inspired me to make some of my own very soon! 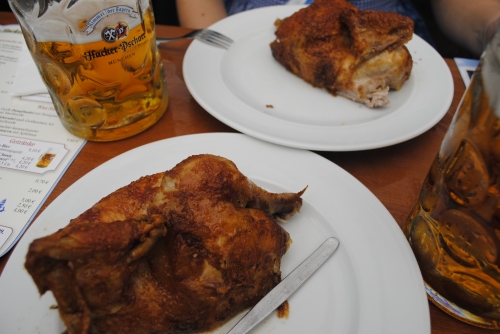 Last but not least: hendl (chicken).  In each of the tents there were large of rotisserie stations getting chickens cooked.  Since everyone seemed to be getting them, we had to try it.  The one pictured above was finger-licking good!  The crust was crispy and full of flavor, while the inside of the chicken was deliciously moist.

There is one more thing that we stumbled upon while wandering through Munich, the Viktualienmarkt.  It’s a large, daily food market close to the Marienplatz (closed Sunday’s).  As Munich began to grow in the 19th century the city needed a larger market, therefore, King Maximillian allowed for a large space close to the city center to be designated for the market to grow.  Over the decades many stalls and pavilions were added.  Unfortunately, the market was severely damaged during World War II, but due to its popularity was rebuilt soon after.

Today the market has about 140 shops and stalls filled with many fresh fruits, vegetables, meat, fish, flowers and much more.  In the center of the market stands a blue and white maypole.  Maypoles can be found in many village squares in Bavaria; in the past, signs were posted all over the maypole indicating the goods and services available around that particular city.  The Viktualienmarkt maypole has the following symbols: beer-carts, carousels, dancers, musicians and a fruit lady.  Every year on the first of May the pole is raised by men wearing Lederhosen. 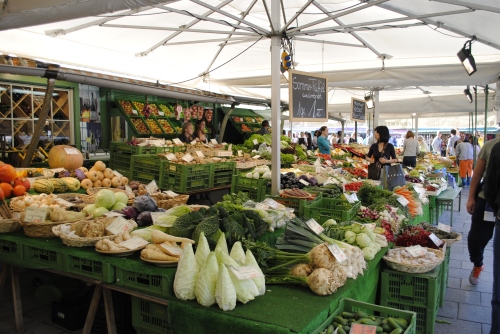 Although we have farmers markets in the US, they don’t compare to the one’s in Europe.  This is just an example of one stand- so much produce to choose from! 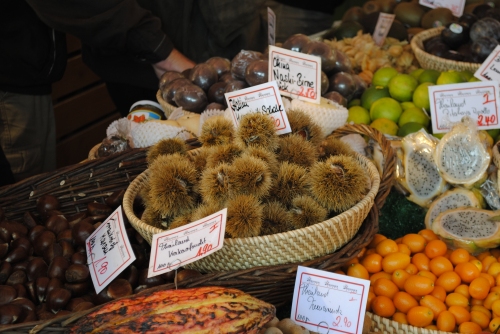 I took a picture of this fruit (I think)- but I have no idea what it is.  If anyone reading this blog knows what this is- definitely let me know.  I thought it was very cool looking- lots of texture.

Since it is Germany- there were a number of pickles.

And lots of cheese!

If any of you get a chance to explore the food and drinks in Germany, you’ll enjoy your time here.  Everyone we met in Munich was very friendly and helpful, lots of smiles to go around.

I hope all of you enjoyed our updates on Europe, don’t worry- recipes coming up!  We didn’t have spicy food in Europe, so we had to make up for it once we got back!

Yesterday we officially bought our tickets for our fall trip to Europe. We’re very excited and we’ve even started a little countdown. Unfortunately, it’s still more than a 100 days away, but that gives us a chance to plan away.

Our itinerary will begin in Kraków (Poland), then we’ll go to Vienna (Austria), and our last stop will be in Munich (Germany).  The end of the trip will let us have some fun at Oktoberfest!  So if anyone has any good tips, we’d love to hear them!

With that, I came across an article about why people choose to travel, which I found interesting.