This was one of those 1 out of 10 meals that we both loved.  It had so much flavor, and it wasn’t too fishy.  This is definitely on the list to re-do!

When I picked up the June/July 2012 issue of Saveur, I noticed it had an article about the cuisine in the Amazon by Neide Rigo (the photos were done by James Oseland).  Since I have never been in this part of the world, I was interested to read about what people ate there.  And the pictures looked so delicious, I had to try at least one of the recipes.

The article focuses on the author’s visit to the Brazilian island of Marajó.  The trip alone took her 2 days from São Paulo: she took a flight, a taxi ride, then a 3-hour ferry ride, a car ride through the jungle, and lastly, a barge.  That was one long trip!

Marajó is the largest island surrounded by freshwater, anywhere in the world.  It’s about as big as Switzerland, and it’s located where the Amazon pours into the Atlantic Ocean.  The advantage to the location is that fishermen can catch saltwater or freshwater fish, it all depends on the time of day and the tides.

The islanders were introduced to beef and diary by the Dutch, French and Portuguese colonizers who brought cattle and African slaves with them in the 17th century.  The current cuisine is a result of 400 years of intermarriage of Europeans, Africans, and native Brazilians.

The afternoon that the author arrived on the island, she was served this delicious soup.  We had eaten the soup just plain, per the recipe below.  Neide’s stew was accompanied by sweet plantains, rice, stewed red beans, pickled chiles, a salad of lettuce and tomatoes, cassava and fresh juices to drink (pineapple, papaya, and white soursop).  If I’m ever near the Amazon, I would love to stop by for a visit, until then, I have this soup to savor! 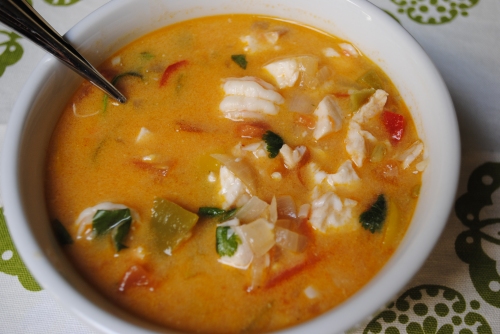 We used tilapia in this recipe, although catfish and halibut were recommended- feel free to swap for any firm-fleshed white fish.  The soup also has a mixture of peppers, but if you prefer bell peppers use those.  Lastly, I used vegetable broth, but if you have fish stock that would be perfect (probably use about 1 cup).