Hello everyone, we’re back!  We were in Europe for 12 days and we went to Kraków, Poland; Vienna, Austria and Munich, Germany.  Each city got about 3 days, and we really enjoyed each of them.

Since we are foodies, we would love to tell you about some of the delicious food we had eaten.

Kraków, Poland
We arrived in Kraków around noon and after dropping off our bags at the hotel, we decided to walk around the city.  The Main Square (Rynek Główny) is located in the center of town and dates back to the 13th century.

In Poland, as in many European countries, breakfasts consist of cold cuts, cheeses, bread and some vegetables.  All of this is usually accompanied by juice or water, and coffee.  This is mainly what we ate throughout our trip, whether it was in our hotels (breakfasts included!) or in cafes. 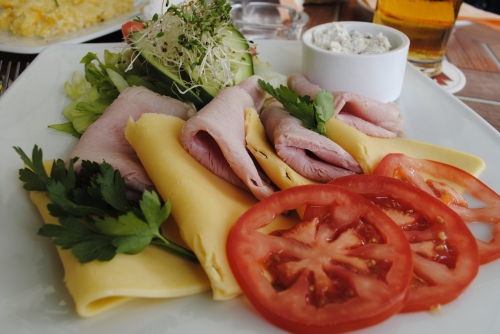 This first breakfast definitely represents the standard around Europe.  It was also accompanied by twarozek.  Twarozek (English: quark cheese) usually has chopped green onions and radishes mixed with it, and eaten on its own or on a slice of bread.

In the next couple of days we had a lot of traditional Polish food.  One of the meals was at Polskie Jadło:

This is kiełbasa and kapusta kiszona (Polish sausage and sauerkraut).  There are many different varieties of sausage and can be served cold, cooked, smoked or grilled.  The sauerkraut usually has mushrooms, carrots and onions cooked with it. 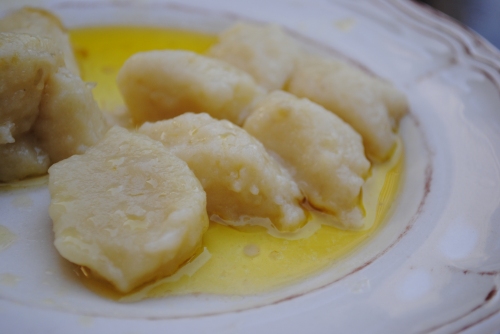 These are kopytka.  The word “kopytka” means “little hoof”- it refers to how the dumplings look- like little hooves.  They look similar to gnocchi, but are made with grated potatoes and flour.  They can be served with meats, being a substitute for potatoes.

These are pierogi’s.  Almost everyone has had one, or something very similar to it (many cultures have these).  They are boiled, baked or fried dumplings with a variety of fillings.  In Poland, the  most popular are: meat, cabbage, mushroom or cheese.  The one’s shown above are with the twarozek I described earlier, they can be boiled or fried with butter, or another fat.  There are also pierogi’s which have fruit in them, most often strawberries and blueberries.

If you have any questions, don’t hesitate to ask!

Yesterday we officially bought our tickets for our fall trip to Europe. We’re very excited and we’ve even started a little countdown. Unfortunately, it’s still more than a 100 days away, but that gives us a chance to plan away.

Our itinerary will begin in Kraków (Poland), then we’ll go to Vienna (Austria), and our last stop will be in Munich (Germany).  The end of the trip will let us have some fun at Oktoberfest!  So if anyone has any good tips, we’d love to hear them!

With that, I came across an article about why people choose to travel, which I found interesting.