Living Social has opened up a live events venue in Washington DC- named 918 F Street– for businesses to provide yet another experience to its costumers.  It’s a beautiful space which has been renovated and updated, and is being used for a number of classes.  So far the events have ranged from pop-up restaurant dinners or tastings, to photography or yoga classes.  It’s a wide spectrum, and I’m sure it’ll continue to grow.

One event which caught my eye was the “Craft-Beer, Cheese and Charcuterie Pairing Class” which was led by Adam Smith, of Cowgirl Creamery.  By now, I’m sure you know that Sam and I are huge fans of Cowgirl Creamery (and cheese!) so we decided to see what this class had to offer.

Cowgirl Creamery, started just north of San Francisco, began making sustainable, artisan hand-crafted cheeses from organic milk in 1997.  Today the store has grown to 3 locations, providing customers with a variety of cheeses from around the world.  In addition, they do have a handful of their own seasonal cheese, all so good I can’t recommend just one.  About 80% of the cheeses at Cowgirl are made in the United States.

Some interesting facts about cheese and beer pairings:
• beer, like champaign, is effervescent; the carbonation cuts through the butterfat
• differently than wine, there are lots of ingredients in beer which can change tastes (hops, malts, yeasts)
• pairings can be done regionally (example below: Colston Basset Dairy Stilton & Crispin’s Browns Lane Cider- both from the UK)
• Proper cheese and beer tasting: 1) taste the cheese- with no bread, cracker or beer; 2) smell the beer; 3) take a small sip of beer; 4) lastly, take a small sip of beer and small bite of the cheese- allow the cheese to melt in your mouth, mixing with the beer

So what did we get to try?

I’ve added some information (and links) to all of the cheeses and beers.  From the pictures above, I started at the top, going clockwise when describing cheeses (although I included an additional picture of the cheese above the description).  For the beers, I began all the way to the left.  I’ve listed the cheese, and then the beer- those two were paired together for this class.

Cowgirl Creamery Red Hawk: made in Pt. Reyes, CA; it’s a year-round cheese; triple-cream; it was washed with a brine solution that tints the rind pink (due to the wild bacteria); it was aged for 4 weeks

The Bruery’s Saison de Lente: brewed in Orange County, CA; this beer is seasonal- available from March to May, but made during the winter; it’s a light blonde; fresh hoppiness; lightly and flowery in flavor; made from Belgian-style yeast 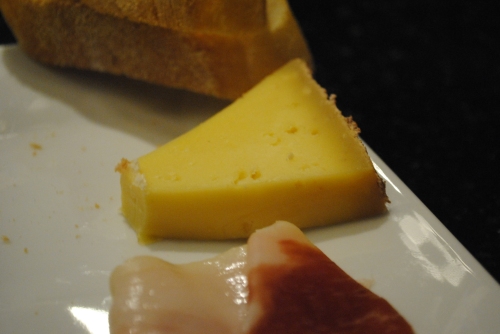 Meadow Creek Dairy Mountaineer: made in Galax, VA; smooth texture; aged in cellars for a minimum of 6 months; the flavor is nutty and sweet, very similar to Gruyere; great cheese for mac ‘n cheese or with figs; it’s a European-style Alpine cheese (which is usually made in: France, Switzerland, or Northern Italy)

Cabot Creamery’s Clothbound Cheddar: made in Greensboro, VT; made in partnership between Cabot Creamery and Cellar’s at Jasper Hill; traditional clothbound cheese; aged for 10-14 months; has a sweet and nutty flavor; once the cheeses are removed from their molds, they are bandaged with cloth and painted with lard; Cabot Creamery is one of the oldest farmer-owned cooperative creameries; the wheel above is made up of 480 servings 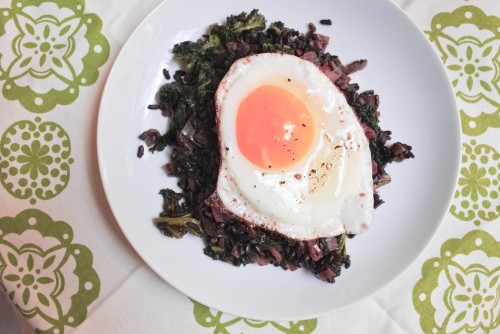 This specific wheel was made in December 2010.

Below is a piece of cloth which was wrapped around the cheese:

Bear Republic Racer 5 IPA: brewed in Healdsburg, CA; IPA’s were brewed by the British while traveling to India in the 19th century, therefore to make the long journey the beers had lots of hops; light-bodied and floral in taste

Essex Street Cheese L’Amuse Signature Gouda: made in Beemster, Holland; the cheeses are aged for 18 months to 2 years; velvety texture with a hazelnut flavor 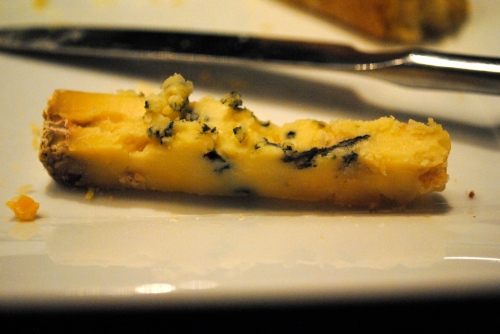 Colston Bassett Dairy Stilton: made in Nottinghamshire, UK; Colston Bassett is one of the smallest stilton dairies in the UK; mild and tangy flavor; the rind is dry and tough; after 4-6 weeks the cheese is pierced, air enters the holes and the Penicillium roquefortii begins to grow; a week after it is pierced again, then on sale 3 weeks later

Our last lesson of the class was on storing cheese:
• keep it well wrapped (parchment or wax paper are best)
• scrape mold off, or cut off the moldy piece
• to keep the cheese moist, store it in one of the following: wine cellar, produce drawer, or a cigar box (in the fridge)

If any of you are in the Washington DC area (or in San Francisco), and have a love for cheese, definitely check out Cowgirl Creamery.  The staff is very knowledgeable and helpful in finding pairings, snacks or new cheeses to try.