Although summer is one of my favorite seasons, I think I’m ready for a new one.  Fall, with it crisp air, root vegetables and football games will be welcomed with opened arms.  But until the weather changes, I’m still in summer mode, searching for fall recipes and marking the one’s that will be tried out soon.

But I needed to try just one that I had recently found.  The September Book Club was at my house, so it was a good enough reason to make a dessert.   The apple cake, almost a crisp, was so light and airy, it didn’t feel like a fall dessert, so this one would be perfect end-of-the- summer/early fall way to finish off a meal. 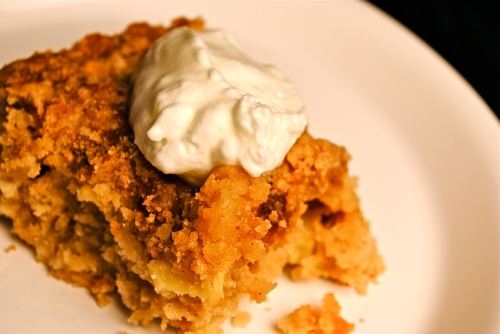 Apple Cake with a Cinnamon Crumble Top
Adapted from: Cooking After Five

In a large bowl, mix together 1 stick of softened butter and 1 cup of brown sugar until it’s light and fluffy.  Then, add the eggs one at at time, beating it well.  Slowly add in 2 cups of flour, baking soda, 1 tsp cinnamon, 1/2 tsp salt and 1 tsp vanilla.  Then add in the sour cream, and mix well.  Finally, fold in the apple pieces.  Pour the batter into the baking dish.  Sprinkle the cake with the topping.

Preheat the over to 350ºF.  Bake the cake for 30-40 minutes.  Once it turned golden brown, remove from the oven and let it cool for at least 10 minutes.

(Optional) When the cake is ready to be served, make the whipped cream.  Whip about 1 cup of heavy whipping cream using a hand mixer or a stand mixer, add confectioners sugar and 1 tsp of vanilla.  Mix until fluffy.  Top the cake with the whipped cream.